I had been working on strand-specific paired-end reads from HiSeq lately and I had trouble mapping reads back to assembled transcripts using Bowtie as well as using RSEM to estimate transcript abundance. After some google searches, I found some information about the dUTP method used to generate stranded reads on Illumina website as well as a blog that explains an orientation of reads from different protocols and which flag (library type) should be used to run Tophat. However, I could not find any information on how to run Bowtie/Bowtie2 as well as RSEM, which uses Bowtie as a default aligner. After a couple days of frustration here is what I learned.

Tophat uses --fr-firststrand for a library created by the dUTP method. This is stated clearly in the manual, so it is easy to understand. In contrast, Bowtie/Bowtie2 uses --fr, --rf, --ff to specify the orientation of paired-end reads.

--ff means both reads are from a forward strand. 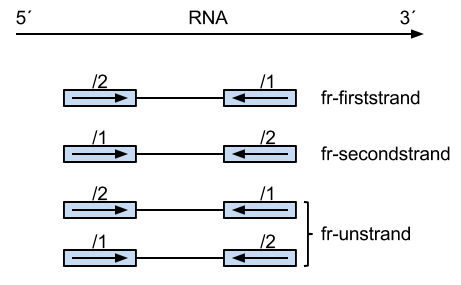 With --fr flag, the upstream reads could be either /1 and /2, which is valid for unstranded reads. However, as you can see from the figure, the /1 reads from dUTP are from the reverse strand only. So, we need to tell Bowtie not to map the /1 reads to the forward strand. This behavior can be achieved by specifying --nofw flag.

Therefore, to run Bowtie on dUTP reads, the command should look something like this:

To compare the results, I ran Bowtie/1.0.0 on the same dataset (1M reads) with different flags specified.

The number of reads mapped with --fr and --nofw is a bit lower than that from --fr alone. This is due to the fact that without --nofw flag, Bowtie maps /1 reads to both strands.

Note, with --norc flag, Bowtie will not attempt to map the /1 reads to the reverse strand.

For example, the command should look something like this:

New flags for strand-specific paired-end reads will be added to RSEM in the next minor release. You can read the discussion on this issue here.